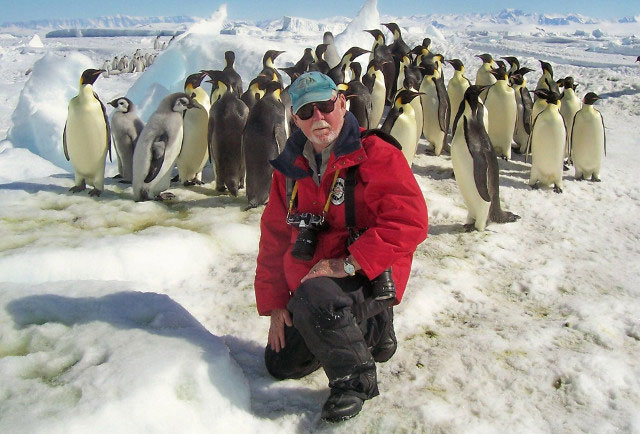 The polar world celebrates the life of biologist Frank S. Todd, a world-renowned authority on penguins, with the creation of the Frank S. Todd Memorial Fund for supporting scientific work on South Georgia to the benefit of all seabirds.

Frank Todd (1942 – 2016) leaves a legacy of achievements and dedication to wildlife that is both worth honoring and worth continuing. His work focused on Antarctica and the sub-Antarctic islands, including South Georgia, for 45 seasons.

He travelled all seven continents and beyond, but it was always South Georgia that held the magic key to his early success and his lifelong passion. To quote Frank Todd, “If God was to take a vacation, He or She would go to South Georgia.”

At the request of the US National Science Foundation, he established a breeding colony of Adélie and emperor penguins at Sea World in San Diego to facilitate long-term, year-round research. Decades ago, most experts were doubtful that emperor penguins could be kept, much less propagated. Frank proved that it could be done.

His captive rearing of waterfowl and creation of penguin encounters worldwide have created research opportunities for scientists, naturalists and others. This has helped to broaden the understanding of the biology and to assist in the survival of several species of concern.

Frank was devoted to understanding wildlife behavior from both captive and wild field observations. He wanted others to experience and learn. Through sharing his personal experiences and observations – by guiding, photographing and working as expedition staff – through his writing, lecturing and multiple published books – Frank enhanced the knowledge of thousands of fellow polar adventurers.

The Frank S. Todd Memorial Fund has been developed to provide an opportunity for each of us to participate in backing scientific efforts on South Georgia that will benefit seabirds. You can make a tax-deductible contribution to FOSGI (Friends of South Georgia) in the name of Frank Todd. These contributions will be earmarked for habitat restoration or support of ornithological research on South Georgia.

We actively fundraise for resources required by our projects. Here is a list of some of the current items we seek are seeking funds for:

*Cost of personnel, equipment and supplies for team rat’s inspection team in 2016 and 2017

Read the latest RatWatch document on how visitors to South Georgia can help with Phase 4 (2016-2018) detective work.