Thanks to all of us working together, the island of South Georgia has been declared rodent free – the result of ten years of planning and fundraising, three sessions of baiting work covering over square 1000km and a survey checking over 100 sites – phew! You, the supporters of Friends of South Georgia Island and the South Georgia Heritage Trust, made this incredible achievement possible.

As South Georgia Pintails and Pipits cannot breed in areas where rats live, they are indicator species for the success of rat eradication efforts. The presence of these species on the island, now cleared of rats during the Habitat Restoration Project is an important indicator of it’s success.

We had thrilling news, in January 2015, that the first South Georgia Pipit nest was discovered in an area we had cleared of rodents in 2013. This was the start of many indicators showing the rapid impact of the Habitat Restoration Project on this potentially endangered species. The South Georgia Pipit, which is the world’s most southerly songbird, cannot breed in areas infested with rodents.

In the 2017/18 survey (project phase 4 ) of the island, we detected the presence of nesting pipits, pintails, petrels, prions, albatross and more. We have a recording of pipit song on our gallery if you would like to hear it.

We are supporting the GSGSSI program to ensure that vessels entering the maritime zone do not re-contaminate the island with rodents, using rodent detection dogs to test/check incoming ships and cargo. Read more here.

Story of the Habitat Restoration Project

In March 2015 we reached a historic milestone in this project when the phase 3 baiting of the island was completed. 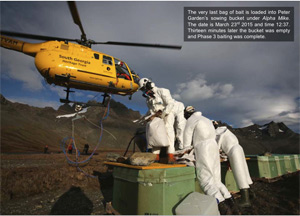 The project director, Professor Tony Martin, wrote from South Georgia Island of the importance of this milestone in the “Late March 2015 Project Newsletter“: 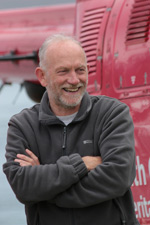 “…the enormity of what we’ve achieved is beginning to sink in. And when I say ‘we’, I’m not referring to Team Rat, but to the thousands who have contributed to this project in so many ways over many years. …And of course the donors of many nations who share a vision of a rejuvenated South Georgia. A South Georgia free of destructive predators that should never have been here; an island once again able to host the millions of birds that once filled its night sky with a cacophony of sound and honeycombed its soil with myriad nesting burrows.”

The 2017 large scale survey of the island was the next major milestone in the project.

“our job is far from over…the Habitat Restoration Project must and will continue until we know that the baiting has achieved its aim.

…we cannot afford to take anything for granted.

We have to be vigilant for any sign that rodents have survived the initial baiting operation, and be ready to snuff out any such pockets of survivors. To that end a large scale yacht-based survey (with all its concomitant costs) will be carried out in a couple of years’ time; only after that can we truly relax and know that the job has indeed been done.”

Phase 4 Monitoring: In 2017/18 we sent a team of rodent detector dogs to the island looking for any signs of rodent presence. Also more importantly we detected the presence of nesting pipits, pintails, petrels, prions, albatross and more. The great news is we succeeded in the largest and most successful rodent eradication anywhere on earth!

Having been working with this project since 2009, to be able to sail with Team Rat in January and February 2015 was a privilege. Our team was incredibly competent, professional and frankly, the best in the world!

Thanks to all of Team Rat for all four phases and to all our administrative support staff, committee members, Trustees, board members, volunteers and most importantly our donors. You have contributed towards securing South Georgia as one of THE main breeding sites for seabirds and our pipit anywhere else in the world. In the future, South Georgia will have black clouds of seabirds choosing this island for its breeding preferences.
With gratitude and respect, we thank you all thus far for everyone’s community efforts.
Denise Landau

Read more about the survey in our Newsletter and Latest News Pages. 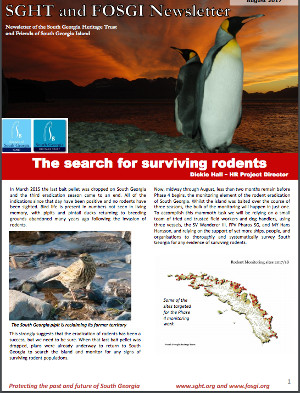 Click on image above to see the Newsletter section

Find out how to support our work.,