The Scientific History of South Georgia

For over 200 years South Georgia Island has attracted scientists eager to learn from it’s unique natural environment. Visit our science section to find out about contemporary and future science in South Georgia. 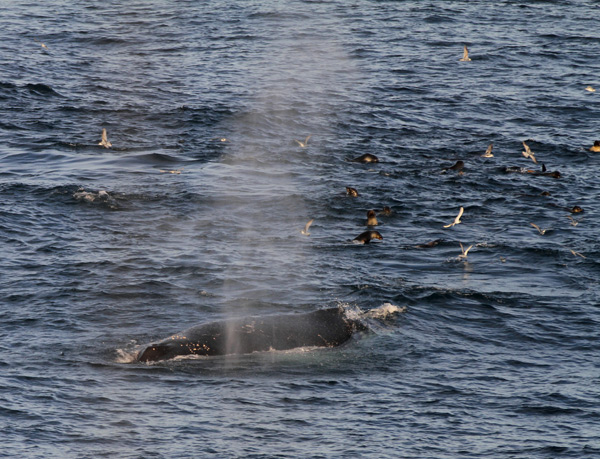 Whales and other wildlife off the South Georgia coast. Photo by Tony Martin (January 2015)

The SGHT online shop has books that touch on the scientific and general history of the island – for example “A Visitors Guide To South Georgia” by Sally Poncet and Kim Crosbie.

This section attempts to briefly summarize these scientific explorations and provide a glimpse of the island’s scientific heritage.

The scientific timeline below covers the 200+ years of South Georgia science:

Captain Cook’s 1775 expedition made the first landing, survey and mapping of South Georgia Island. It reported on the wildife, climate and geography of the island.

The existence of the island was first recorded by Anthony de la Roché, he was an English merchant born in London to a French father and English mother. In 1675 his ship was blown off course during a commercial voyage and found refuge in one of South Georgia’s Southern bays. Captain cook was aware of Roché’s discovery, he visited the island as part of his second (of three) world voyages. The purpose of the second voyage was “To search for the Southern Continent and to test a version of the John Harrison chronometer for longitude determinations”. 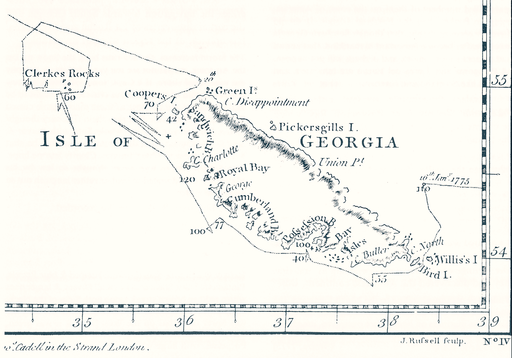 Other early scientific exploration on South Georgia probably date from 27 December 1819 when a Russian expedition commissioned by Tsar Alexander I and led by Captain Thaddeus Bellingshausen arrived. Although Captain Bellingshausen never landed on South Georgia the expedition’s detailed account of the island reported numbers of whales and many species of birds and giant kelps near Willis Island.

James Weddell arrived in 1823. He gave an account of the island’s natural history, the exploitation of seals by the sealers and he recorded the first seismic activity by observing a dish of mercury being used as an artificial horizon while determining the exact position of the island. The behavior of albatrosses and penguins were also recorded. 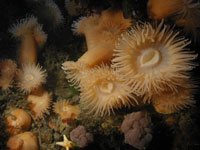 The first land-based scientific expedition took place from August 1882 to September 1883. A German team (The German International Polar Year Expedition) led by Dr K. Schrader included physicists, a meteorologist, a botanist, a zoologist, a medical officer, an engineer, an artist, a mechanic, a cook, a carpenter, and a seaman. The main objective of the scientific program was the the recording of the Transit of Venus and included other astronomical, meteorological, geomagnetic, gravimetric, and tidal observations. Biological, geological and other research was undertaken. The expedition brought in for the first time a hound, 3 oxen, 17 sheep, 6 goats with 3 kids and 2 geese. The team also tried to grow potatoes, rye, barley, wheat and some salad. The expedition was a success and in particular provided some valuable mapping of the local area that was used subsequently in the Admiralty charts of the area.

The ship Antarctic, captained by C. A. Larsen, anchored in Jason harbour in 22 April 1902. The scientists on board, J G Anderson, C J Skottsberg and S Duse made zoological, botanical, and geological collections and observations, prepared charts, and undertook significant other work. The ship visited Moltke Harbour, Cumberland Bay, Maiviken (May Cove), Grytviken (Pot Cove) (which Andersson named), Possession Bay and the Bay of Isles. The first fossil from South Georgia was collected near the Moraine Fjord. The expedition results were published and many charts prepared. C A Larsen learnt much about the economic potential of the island. The expedition subsequently lost its ship by being crushed in the Antarctic ice, and was stranded during the 1903 winter until rescued on Paulet Island in November 1903 by the Argentine ship Uruguay captained by Julián Irízar. 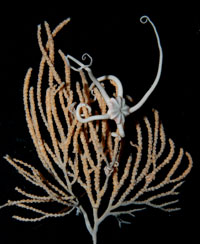 Dr Wilhelm Filchner led a German expedition on 3 visits during 1911 and 1912 to conduct geological, geophysical, meteorological and some other scientific investigations in the Deutschland. On their arrival in South Georgia C. A. Larsen made the steam yacht Undine available for a hydrographic and coastal survey. The expedition opened and used the 1882-83 Polar Year expedition base, however only the main building was useable once the accumulated snow was cleared out and the roof repaired.  On return from the South Sandwich Islands, while anchored in King Edward Cove, the wireless operator Walter Slossarczyk went out in a small open boat on 26 November. He was never seen again. The whale catcher Fortuna found the boat well out in Cumberland Bay. A memorial cross was erected to his memory and still stands above the cemetery at Grytviken. The expedition provided a much improved chart of South Georgia as well as astronomical positions and photogrammetric survey details as well as hydrographic surveys.

The sealer Daisy was the last to visit South Georgia at the end of the first epoch of sealing. On board was a naturalist R.C. Murphy, who had been sponsored by the American Museum of Natural History and Brooklyn Institute of Arts and Sciences. He wrote a valuable account of his findings and collections of flora and fauna that included over 100 bird skins, seal skulls, whale embryos, fish, invertebrates, plants and rocks.

Major Barrett-Hamilton of the British Natural History Museum undertook a scientific investigation of whales in 1913-14 until his sudden death. He sampled 294 whales processed at Leith.

Alberto Carcelles made a series of collections and observations on the birds of South Georgia on behalf of the National Museum of Buenos Aires between 1923 and 1927. He also prepared a report on birds, whales, whaling and various other aspects of the island. Captain Richardo Vago conducted a hydrographic survey in Cumberland Bay and took geomagnetic observations at Royal Bay.

The Discovery Investigations (1925-51), encompassing some of the most ambitious scientific studies ever undertaken, were commissioned by the Royal Society. The pioneer vessel undertaking the Discovery surveys was Captain Scott’s RRS Discovery, refitted for survey work. On board the first voyage was Alistair Hardy, artist, scientist, and the inventor of the Continuous Plankton Recorder (CPR). He was knighted in 1957 for his work in marine biology.

The Discovery surveys aimed to understand more about the whale populations in the Southern Ocean, their distribution and the food chain that supported their numbers, which were in decline. The results of the extensive studies were captured in the 34 volumes of the Discovery Reports which are still the primary reference for marine studies of the Southern Ocean.

View the Discovery Reports list on the South Georgia wiki.

A number of scientific voyages to research the whaling industry were made by consul Lars Christiansen between 1927-29 that were complementary to the investigations made by RRS Discovery. Lars Christiansen, son of whaling pioneer Christian Christiansen, founded a whaling museum in Sandefjord, Norway, in his father’s memory.

The principal objective of the Kohl-Larsen Expedition of 1928-29 was to study the glaciations of South Georgia. Part of the exploration included the large ice plateau behind Husvik that was later named the Kohl-Larsen Plateau, now called the Kohl Plateau. Glaciological, geological, biological and meteorological observations were made. Many fossils and biological specimens were collected. The first commercial cinematographic film was made on South Georgia showing the expedition’s activities, as well as the whaling industry and the island’s wildlife.

Erich Dautert, a German from the University of La Plata, Argentina, published a book in 1931 of his two man biological expedition. It contained a good description of the Grytviken whaling station and its activities.

Niall Rankin led a private ornithological expedition to the island in 1946-47. Albatross was a converted lifeboat taken to the island on a whale factory ship, the Southern Venturer. Rankin studied penguins, albatrosses and other birds. He published an illustrated book in 1951.

Steiner Olsen, a Norwegian, investigated the fisheries potential around the island in the 1951-52 season. The project resulted in only two boats fishing during the following season, due to the depression in the price of fish and whale oil.

During the period 1953-55 both Bernard Stonehouse and Nigel Bonner conducted biological studies and produced several scientific reports on reindeer, king penguins, fur seals, the brown skua and other animals. This was the start of Nigel Bonner’s long association with the island. He was appointed sealing inspector and government naturalist shortly after the expedition.

As part of the International Geophysical Year (1955-59) international cooperation studies were conducted on South Georgia. A small laboratory was established at King Edward Point where seismic and gravitational observations were made. The meteorological observatory established by C.A. Larsen contributed data. A tide meter measured mean sea levels. A glaciological study, principally on Hodges glacier, was undertaken.

Expeditions to Bird Island from 1958 to 1964 under the leadership of Lance Tickell were the pre-cursor to British Antarctic Survey’s permanent field station in operation today.