The First World War (1914-18) created a huge demand for whale oil from South Georgia’s whaling stations. The oil was needed to make glycerol for the manufacture of nitro-glycerine for explosives. Whale oil was also used in edible fat production. To increase production, restrictions on the number of whale catchers were relaxed, as was the utilization of the whole carcass.

The Second World War (1939-45) interrupted not only the whaling industry but also scientific and other expeditions. Whale oil continued to be important in the production of edible fats, but other ingredients were used for manufacturing high explosives. British and Norwegian floating factories and many whale catchers were requisitioned for the war effort. Only the station at Grytviken operated throughout the war; Leith Whaling Station was used intermittently in the 1940-41 and 1942-43 seasons.

German ships operated in Antarctic waters against allied whaling fleets. Two First World War 4-inch naval guns were deployed to protect the whaling stations at Grytviken and Leith.  HMS Ajax and Exeter visited South Georgia before the start of hostilities in November 1938 and deployed their Walrus aircraft and took the first aerial photography of South Georgia used for mapping and glacial study. Both ships were involved in the battle of the River Plate to sink the German battleship Graf Spee. After this action HMS Exeter was repaired at South Georgia and her wounded hospitalized there.

The prelude to the 1982 conflict in the Falkland Islands commenced in Leith Whaling Station. In 1980, an Argentine scrap merchant, Sr Constantino Davidoff had arranged with Christian Salvesen to extract scrap metals from Husvik, Stromness and Leith for £115,000. On 19 March 1982 Davidoff arrived at Leith with 41 workmen in the Argentine Navy ship Bahia Buen Suceso commanded by Capitan Briatore. The ship did not report to Grytviken as ordered and landed Argentine military personnel who raised the Argentine flag. Davidoff and his men set to work. British Antarctic Survey (BAS) scientists observed and reported the illegal Argentine activities. 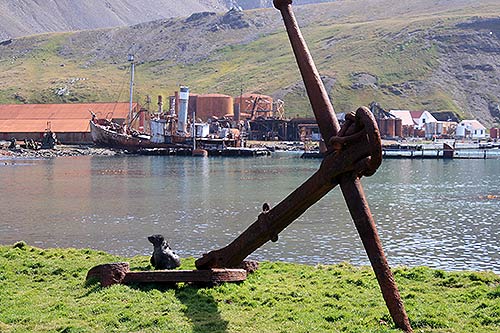 On 2 April 1982 the Argentines invaded the Falkland Islands. Lieutenant Astiz at Leith paraded his men under the Argentine flag and addressed them saying the island was to be called “Isla San Pedro”. On 3 April the Argentines moved on to Grytviken. A sharp engagement followed with the Royal Marines detachment that had been landed by HMS Endurance following the BAS reports. The Argentines lost a Puma helicopter and the Frigate Guerrico was badly damaged, injuries occurred on both sides although no one was killed. South Georgia was taken forcibly by the Argentines.

A strong naval force was assembled at Ascension Island with Captain Brian Young RN in command. The force – HMS Antrim, Plymouth, RFA Tidespring and now joined by HMS Endurance – sailed into South Georgia waters on 20 April 1982. Reconnaissance missions by Special Forces to determine Argentine dispositions ashore were launched on 21 April. The next day two helicopters crashed in bad weather on the Fortuna Glacier. RFA Tidespring, a large oiler which was carrying M Company (Captain Chris Nunn Royal Marines) of 42 Commando Royal Marines, was dispatched well out to sea on 24 April after the appearance of the Argentine submarine Santa Fe. The same day the force was joined by HMS Brilliant (Captain John Coward) sent down from the Fleet off the Falkland Islands. Early in the morning of 25 April 1982 the Santa Fe was attacked and abandoned, disabled, at the King Edward Point jetty.

A scratch military force of 75 men under command of Major Guy Sheridan Royal Marines was assembled on HMS Antrim and landed by helicopter on Hestesletten with naval gunfire support from HMS Plymouth and Antrim. The Argentine garrison at King Edward Point surrendered without a fight and 137 prisoners were taken in the early evening of 25 April. The small Argentine garrison at Leith surrendered to HMS Endurance (Captain Nick Barker) and Plymouth (Captain David Pentreath) the next day.