A poignant reminder of the harshness of the past human history of South Georgia is reflected in the number of wrecked vessels that lie abandoned in the island’s bays and coves. They now offer sanctuary for seabirds and other creatures as nature reclaims them. Some of the ships that were wrecked or deliberately beached in South Georgia are discussed in this page.

More detail and photos can be found in ‘The Maritime History of South Georgia’ by Robert Burton available from the SGHT online shop. 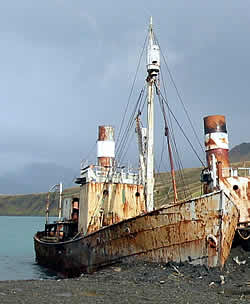 The three small sealers and whale catchers on the beach at Grytviken are interwoven into the history of South Georgia.

Dias was a sealer for all her service, while Albatros and Petrel were originally whale catchers and then used for sealing. Dias is 33.1 meters long, 167 tons and built in 1906 at Beverly near Hull and plans. The return of Dias for restoration and display in the city of Hull is being discussed. Albatros is 32.8 meters long, 210 tons and was built in 1921 at Svelvik, Norway.

Petrel drawn up in a ‘mud berth’. Photo The Maritine History of South Georgia.

Petrel is 35.1 meters long, 245 tons and built in 1928 at Oslo. They were powered by triple expansion coal-fired steam engines and latterly heavy furnace oils.

The remains of Louise lie on the southern side of Grytviken.

The wreck was badly damaged by fire in the 1980s, during a military training exercise. Louise was a wooden copper clad three masted vessel used by C. A. Larsen to establish the Grytviken whaling station in 1904. Having transported men and materials (her baulk ports enabled long timbers to be loaded), she was used as floating accommodation and then finally as a coaling hulk. Built by G. and C. Bliss of Freeport, Maryland, USA, as Jeannie S. Barker in 1869 and then sold in 1880 to a Sandefjord company for use in the Baltic timber trade. She is 52.8 m long and displaces 1065 tons. 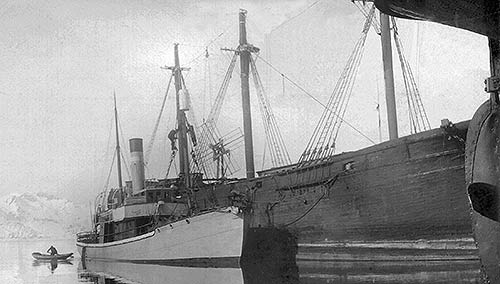 Fortuna (next to the larger Louise). Photo The Eldbjørg Spetalen collection.

She was the first whale catcher to operate in South Georgia. Fortuna’s remains lie submerged just north of Hope Point and can be seen at low water.
She was built in 1904 in C. A. Larsen’s Sandefjord for Compañía Argentina de Pesca and was 30.3 meters and 164 tons. Fortuna Bay and glacier are named after the ship.

Karrakatta on the slip at Husvik. Photo Steve Brown

Her last job was to provide steam for the workshop via a lagged steam pipe that emerged from hers bows, near the whale cable run. She is 32.4 meters, 179 tons with engines developing 69 horsepower. She was built in 1912 in Oslo for the West Australian Whaling Company (Chr Nielsen and Co).

In Leith Harbour lies the James Turpie, where she sank at her moorings. An iron steam ship built in 1881 in Newcastle by A. Leslie and Company. She was used as a coal hulk and in 1946 sank. She is 82.5 meters and 1732 tons with engines that could produce 172 horsepower. 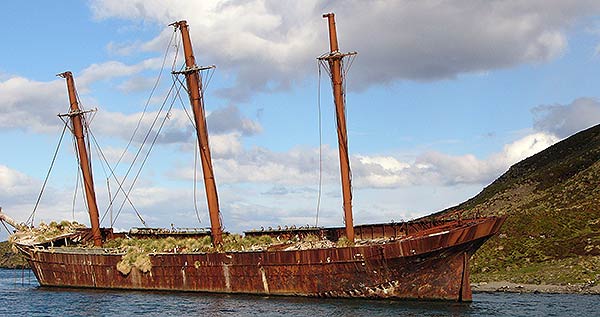 She was used as a coaling ship for the whaling station. Bayard lost her mooring at the coaling pier on the northern side during a severe gale on 6 June 1911. Blown onto the rocks on the southern side and holed, she rests there today, as a breeding site for Blue-eyed Shags. Built in 1864 by T. Vernon and Son, Liverpool, she is 67 meters long and displaced 1335 tons. Little remains of the whaling station other than a small train engine.

She is 75.9 meters long and displaced 1686 tons. Full of coal, to be used as a coaling hulk, she was towed to South Georgia by 4 whale catchers from Cape Town in about 1912. The vessel was built by J. Reid and Co, of Glasgow in 1883 and first named Sierra Pedrosa for service in the Sierra shipping line of Lima.

Fridtjof Nansen was a floating factory ship that foundered off the Barff Peninsula on her first voyage to South Georgia on 10 November 1906. She hit an uncharted reef and sank within 7 minutes after breaking into three. Nine sailors died of the crew of 58 who were rescued by the accompanying whale catchers. The reef is now called the Nansen Reef. The ship was built in 1885 in Newcastle and was of 2,563 tons.