My first trip to South Georgia was in 1993. It was easy to walk along the beaches. There were a few seals but not many.

Today it’s a whole different story. Fur and Elephant Seals abound, in fact It’s thrilling to know that a few individuals were able to find shelter either in South Georgia or somewhere in the southern ocean away from the seal hunters.

Once hunting ended, the seal population was able to recolonize. It’s taken 200 years. The success is due to enough habitat and food availability.

We can reverse human destruction and South Georgia is a great example of good conservation decisions that allow wildlife to succeed.

The following are excerpts from South Georgia’s sealing history. Come visit the museum in Grytviken to see remnants of a lost industry.

Remembering the Impact of Seal Hunting in South Georgia

When Captain Cook visited South Georgia in 1775, he noted the island’s abundant population of seals. British sealers arrived from South America in 1788, followed by others from the US in 1791. Thus began a brutal period of South Georgia’s history – the human exploitation of two of its marine mammal species, the Antarctic Fur Seal and the Southern Elephant Seal.
The sealing industry first targeted the Fur Seals. Fur Seals were clubbed or lanced to death and then skinned. Skins were washed in salt water and salted before being packed into barrels and shipped to Europe, North America and China. 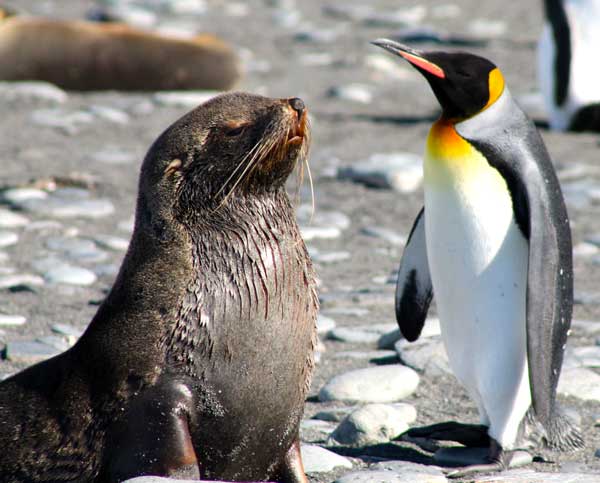 Competition between sealers was intense and there was much secrecy around early sealing activities – as a result the full extent of sealing that took place during the early years is unlikely to ever be known. In 1800 Captain Fanning from the Aspasia recorded taking 57,000 Fur Seal skins, probably the largest single haul taken from South Georgia. In 1825, James Weddell, then a sealer, estimated that 1,200,000 Fur Seal pelts had been taken that year. By the early 1900s Antarctic Fur Seals had been hunted to virtual extinction and sealing became uneconomical. From 1908 to the mid-1960s, British legislation came into force to protect all breeding grounds of the Antarctic Fur Seal in the South Atlantic Ocean, which enabled Fur Seal populations to recover.

As the number of whales around South Georgia declined, attention turned to the Southern Elephant Seals, which were taken for their oil. However, this process was only profitable when large numbers of seals could be found. This fact helped to ensure a sustained Elephant Seal population, albeit at lower levels. A landing party would set up large cast iron try pots on a suitable beach. Seals were slaughtered and stripped of their blubber, which was transported to the ‘try works’ using ‘shallops’ (boats that could carry up to 30 tones). The blubber was boiled down and the resulting oil stored in casks. It was sold for a similar price to whale oil. Some try pots remain intact today and can still be seen on South Georgia’s beaches. Other remains of sealing activities can be seen in the South Georgia museum.

Later, licenses for hunting bull Southern Elephant Seals were issued annually on a rotation basis permitting sealing in one of four zones on South Georgia. These licenses limited the number of Elephant Seals taken from that area between set dates to a fixed quota of 6,000 seals per annum. Ten percent of the bulls were to be left on the beach. Sealing companies were required to provide a Government sealing inspector with detail on the teeth of animals taken (to identify age) and catch statistics; thus scientific management helped to conserve seal populations and stabilize the industry. Sealing is perhaps the only such industry that was able to preserve a more or less stable population of the harvested species.

Following the decline of the whaling industry, the whale catcher ships, Petrel, Albatros and Dias, were converted for sealing. Their experienced crews gained the reputation of being able to navigate into almost any bay on South Georgia. Seals were flensed within 2 to 3 minutes of death and their blubber only used to produce high quality oil. In the 1955-56 season 2,011 tons of oil was produced from 6,000 seals.

Sealing and whaling finally ceased in the mid 1960s. In the 2003-04 summer season the three sealing vessels, Petrel, Albatros and Dias, were cleaned of their heavy oils, stabilized and partially hauled up on the beach at Grytviken where they can be seen today.