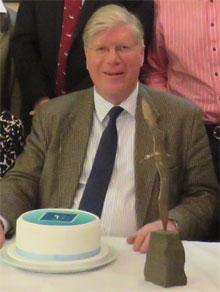 For the last 14 years, Howard Pearce tirelessly dedicated his time and energy towards the betterment of South Georgia. FOSGI is grateful to have worked along side Howard for the last 5 years and wish him and his lovely family well in his retirement (at least from this project). The picture on the left is of Chairman Howard Pearce during SGHT’s Annual General Meeting in Cambridge, England on February 18, 2016. He has been SGHT’s volunteer Chairman for 10 years.

Georgia and South Sandwich Islands, from 2002 to July 2006. He then stepped in as SGHT chairman in September 2006, after the untimely death of the founding SGHT chairman David Nicholls. Howard carried forward the work on the dream of a South Georgia free of rodents and a haven for indigenous birds and plants and preserving and increasing awareness of the human history of the island.

The new SGHT Chairman is Ms. Philippa Foster-Back CBE (right). We warmly welcome her and look forward to working together to accomplish great projects that protect and conserve the natural and cultural heritage of South Georgia.

Above are two photos from the South Georgia visit by SGHT Trustees and friends in 2009, and a close up of the farewell cake.