Tony Martin gave a talk to members of the explorers club. 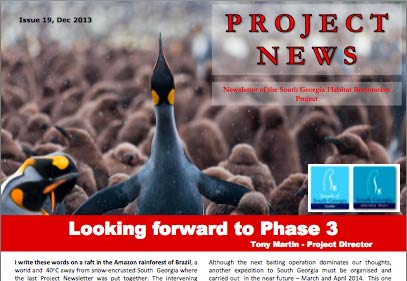 Team Rat has completed the second year of Habitat Restoration fieldwork in 2013. During this season the international team of eradication experts tackled all rodent-infested areas to the west of the Greene, Thatcher and Mercer areas cleared in 2011. All indications are that those areas have now been rat-free for two years, and the birds are already benefitting. Pintail Ducklings are fledging successfully at Grytviken for the first time in living memory! Over 50,000 hectares of infested land were baited in 2013 despite some of the worst weather in a decade, a tremendous achievement.

2012 Donation To FOSGI By The Island Foundation

On June 26th 2012 at a St. James’s Palace luncheon hosted by HRH The Princess Royal, the announcement was made that the Island Foundation would donate a further US$750,000 to the Habitat Restoration project through FOSGI. The funds were used to pay for bait in Phase 2 of the work.