Trustees from South Georgia Heritage Trust met in London to review the last 6 months, celebrate phase 3 Habitat Restoration baiting, overall strategy and plan for future operations in Dundee and in South Georgia. We had a lively fundraising meeting to discuss our needs going forward. If anyone has any great ideas or would like to assist in raising necessary funds to complete this project, please let us know at info@fosgi.org.

Team Rat returned from South Georgia after a successful 2015 baiting season. We are grateful to Captain and crew of the vessel the Sir Ernest Shackleton and the British Antarctic Survey for having the time and space to bring back Team Rat, our equipment and helicopters from South Georgia to the Falkland Islands. Thanks Team Rat and everyone for a successful season once again. 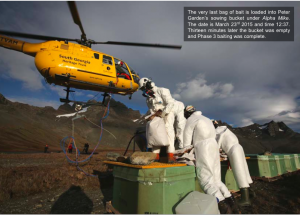 Mon, Mar 23rd 2015. King Edward Point, South Georgia.
At 12:37 today I watched helicopter Alpha Mike flown by Chief Pilot Peter Garden pick up the 259th load of Phase 3 rodent bait and then disappear over the hill. Thirteen minutes later Peter returned with an empty bucket, as he has done many, many times before. But this load was different, because it was the last load of the Charlotte baiting zone, and the last load of Phase 3. Not only that, but this was also the last load of bait for the entire South Georgia Habitat Restoration project. After many years of preparation, three seasons of fieldwork, more than 800 bait loads, a thousand helicopter flying hours and over a thousand square kilometres treated, the final pellet had been dropped.

He goes on to thanks the thousands of supports who make the work possible, then looks forward to the 2017 large scale survey of the island that will check for signs of any surviving rodents:

…the Habitat Restoration Project must and will continue until we know that the baiting has achieved its aim. As I’ve warned in earlier issues of Project News, we cannot afford to take anything for granted. We have to be vigilant for any sign that rodents have survived the initial baiting operation, and be ready to snuff out any such pockets of survivors. It ain’t over until the fat lady sings, and the completion of baiting may allow her a few celebratory warm-up warblings, but the full power of her voice will not be heard until we can be confident that all rodents on South Georgia have been vanquished. To that end a large scale yacht-based survey (with all its concomitant costs) will be carried out in a couple of years’ time; only after that can we truly relax and know that the job has indeed been done.

See the full story, so far, of the Habitat Restoration in out Project News Archive page.