After our victorious and remarkable success in ridding South Georgia Island of rodents, we venture into uncharted territory once again. We are involved in several projects this year; in turn, we remain committed to the protection of one of the most remarkable islands in the South Atlantic.

While sealing and whaling practices have now ceased, South Georgia continues to suffer from the long-term impact of human inhabitation – the ongoing devastation of South Georgia’s bird population by the introduced Norway brown rat.

The Friends of South Georgia Island organization was set up for the visiting public who wish to preserve the island’s natural and historical heritage for future generations – to redress the damage to its environment done in the past, and to preserve the human heritage of the island which so clearly shows the best and worst of humanity.

The groundbreaking Habitat Restoration Project which began in 2011 will save native birds from extinction and increase by millions the numbers of endangered seabirds on South Georgia. We baited in 2013 and again in 2015. For the next 4 years we are actively engaged in carefully monitoring the baited sites. We are planning an evolving monitoring operation and in 2017 there will be a large scale survey to look for any signs of surviving rodents. The absence of rodents will allow seabirds to return to their traditional nesting sites. We are thrilled at our progress so far and reports to date give us the confidence that our work thus far has created safe nesting habitat for the population of South Atlantic seabirds. Read more about our Habitat Restoration Project… 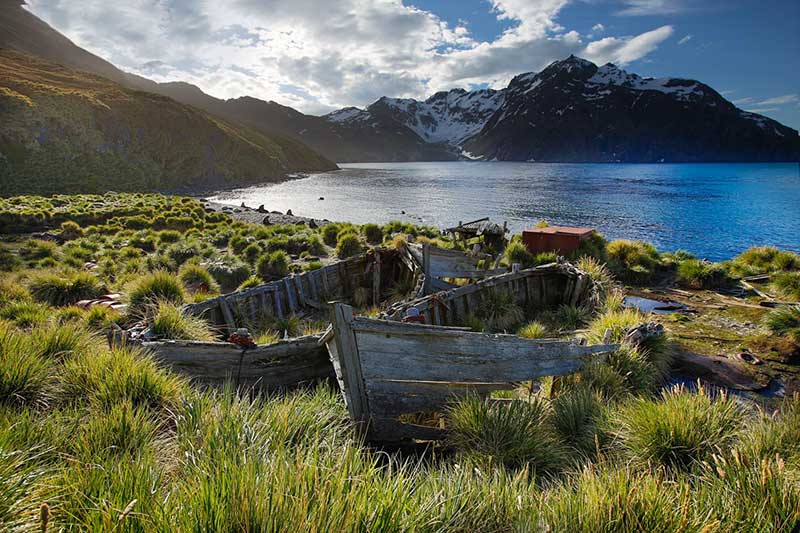 We raise funds for upgrading the buildings and planning for future cultural heritage projects.

funding a professional curator for the Museum while continuing to offer internships to curatorial graduates for work experience.

developing the ground floor of The Main Store, a whaling-era building, to show visitors what early 20th century working life was like, both on and around this remote island.

We play a pivotal role in preserving the heritage of Sir Ernest Shackleton’s connection with South Georgia, and conserving artefacts from the island’s sealing and whaling industries. The South Georgia Museum which our supporters fund the running of, does much of the work in this area, for example tending to Sir Ernest Shackleton’s grave and hosting many artifacts associated with his time on the island.

This tribute to Ernest Shackleton will be on display in South Georgia with travel-ready capability.

We are also lucky to have artists and writers who are fascinated with the island, donate to our work through sales of their artworks and books available in our online shop. Read more about our heritage projects…